On Saturday I pressed pause on my California road trip and went along to the 10th annual Film in California conference held at CBS in Studio City, LA. I’d learned about the event last December, when I was part of the sustainability panel at TLG Focus with California Film Commissioner Amy Lemisch. At the time my trip was already booked so when the programme confirmed a green production discussion, it seemed crazy not to pop by! 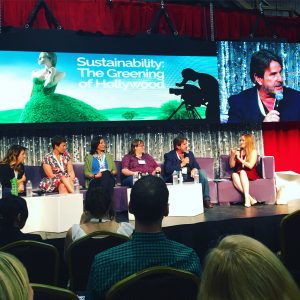 The Greening of Hollywood panel spanned TV, film, commercials, facilities and suppliers, with the speakers giving some interesting insights into the current state of affairs on their side of the pond. Of course they encounter broadly similar issues: getting people to change the habits of a lifetime, finding the right suppliers, and convincing those higher up of the value in being greener. Lisa Day, with 10 years experience as 21st Century Fox’s Director of Energy and Sustainability, has done some amazing work with her team – detailed here in their recent report. She talked about the need for improved technologies, for example around generators, but conceded we are a niche industry – “we use a lot of kit that others don’t, and large corporations don’t want to invest in developing new products for a relatively small market”.

When asked where was most advanced in the green production stakes, the answer was unanimous: British Columbia in Canada. Llew Wells, producer of Animal Kingdom and The West Wing, was the first to chip in, concluding that legislation there had played a huge part in moving things along so swiftly. Crews are used to recycling and composting at home so when the facilities are on set too, it just seems like a normal thing to do. Vancouver’s Green Spark Group and Keep It Green Recycling have also been key in educating crews and providing an appropriate recycling and waste service. 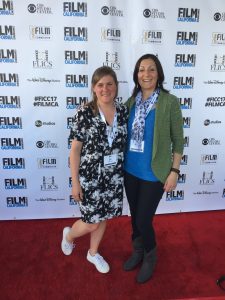 Just as at home, sets are also a big challenge. PGA Green’s chair Amanda Scarano lamented the throwaway nature of modern productions: “In the beginning, we would reuse everything!”, she said, then pondered if the excessive eighties were the catalyst for our current throwaway mentality. EcoSet’s Kris Barberg noted that in the advertising sector, it seems particularly hard to get the responsible dismantling of sets factored into the art department process. They’ve recently opened a warehouse, nicknamed the ‘Materials Oasis’, and have started accepting drop offs from art departments working all over LA. However short timescales, and the lack of an asset recovery or inventory team (that may be present on a feature or TV show) mean that they’re prone to last minute calls for their pickup and sort service. Projects with longer timescales, Llew said, sometimes have the luxury of reusing items from their stores (generic pieces like door frames and windows) and to shop other sets from shows or films that are wrapping up. One of Llew’s shows had saved $75,000 in art dept costs by doing just that. However as Lisa then mentioned, a lot of production designers are protective of their work and can be reluctant for others to reuse their sets for another project. On a positive note though, 21st Century Fox had recently scored a fantastic victory in sourcing FSC certified Lauan, a type of plywood that’s used as the basis for many sets. Historically, non-certified Lauan was widely used, but was also a major contributor to large scale deforestation, along with Palm Oil production. After the usual catch 22 situation of supply and demand had been ironed out (suppliers didn’t want to stock until enough construction co’s asked for it, and the construction co’s didn’t want to ask for it until they knew the vendors could supply enough of it…), the product is now stocked in key filming cities across the US, Canada and also in the UK. This is a great example of the studio working together with 6 others along with PGA Green, the Producers’ Guild of America’s sustainable committee. Their combined power meant they could achieve great things – something we could do more of in the UK, particularly in advertising.

The panel wrapped up with their takeaway thoughts for the audience: freelance producer Rayna Saslove, who works predominantly in commercials and promos, invited us to approach our clients’ marketing teams and ask them why they’re not following the example of Target and Old Navy. Those two brands have been working with sustainable consultants EcoSet and Good Planet Innovation respectively for a number of years, to plan and budget their sustainable strategy into the production of their commercials. And in the meantime the main message was to find allies, to keep talking about the issue and to keep asking for our crews, suppliers and facilities to help us to do better – something that applies no matter what side of the pond you’re on.

Start making a difference on your productions now by committing to our Five Easy Things!