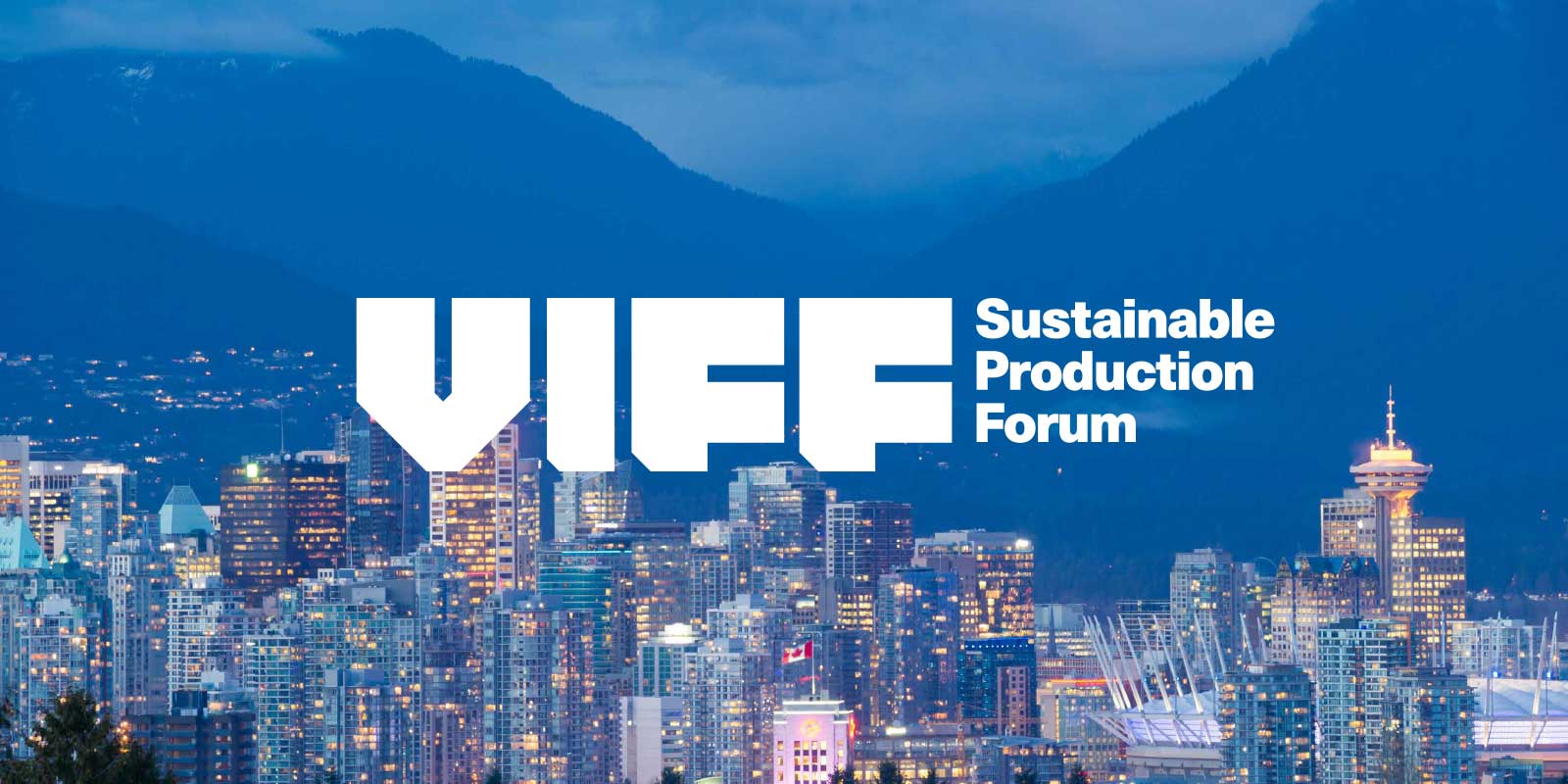 After following the progress of Vancouver International Film Festival’s Sustainable Production Forum for the past couple of years, it was an honour to be invited over to speak this year!

For the first time, the 2 day event (curated by Green Spark Group’s Zena Harris), included a session on advertising. The aim was for those in film and tv to recognise the similar struggles we face when it comes to reducing the carbon impact of our activities - and for those in British Columbia to develop their own green production community, collaborating with and learning from those in the related industries. 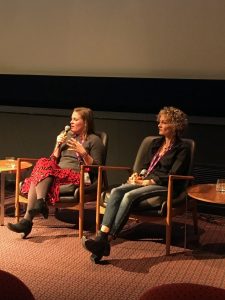 Andréa Fehsenfeld and I

Along with myself; long time commercials producer and Vancouverite Andréa Fehsenfeld and EcoSet’s LA-based Kris Barberg spoke about what they were up to in their respective pockets of the industry. I explained that whilst we in the UK have the support of our trade bodies and seem to have the basics down, we are always looking for better technologies and services to enable us to make improvements beyond on set recycling and water coolers. Without funding we are also struggling to develop carbon calculation and reporting tools, and lacking in carbon literacy education and knowledge around alternative technologies such as renewable power sources.

There were many inspiring voices on stage at the Vanity Theatre. After an update from Jennifer Sandoval about Reel Green's latest work in British Columbia (including their powerful new call to action film), the forum opened with the amazing work of National Geographic photographer Christina Mittermeier, founder of Sea Legacy. On day 2 Helle Bank Jorgensen delivered the keynote speech. Helle works to help boards of directors across Canada (and the world) to understand how to implement the UN’s 17 interconnected Sustainable Development Goals into their company strategies. The question at the core of her presentation: how can we incorporate these ideas, including climate action, sustainable consumption and production, and life below water, into our work? Along with persuading these companies to encourage green production practices in the making of their marketing content, the main opportunity we have in Film, TV - and advertising - is to bring attention to these issues through our work as storytellers. 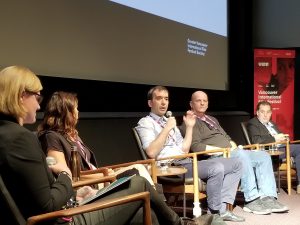 Jeremy during 'The Hollywood Effect'

This lead nicely into the following session, ‘The Hollywood Effect’ which included discussion around the Netflix feature ‘Okja’ - a great example of highlighting the issue of meat production and vegetarianism through narrative storytelling. The hour segment also featured fellow (honorary) Brit, Jeremy Mathieu. Jeremy, who works with the BBC and the BATFA albert initiative, talked about his recent work with the BBC, establishing guidelines around how news teams report on climate change. “To achieve impartiality, you do not need to include outright deniers of climate change in BBC coverage, in the same way you would not have someone denying that Manchester United won 2-0 last Saturday. The referee has spoken.” This was the great quote from Fran Unsworth, the BBC’s director of news and current affairs as a result of their work together. 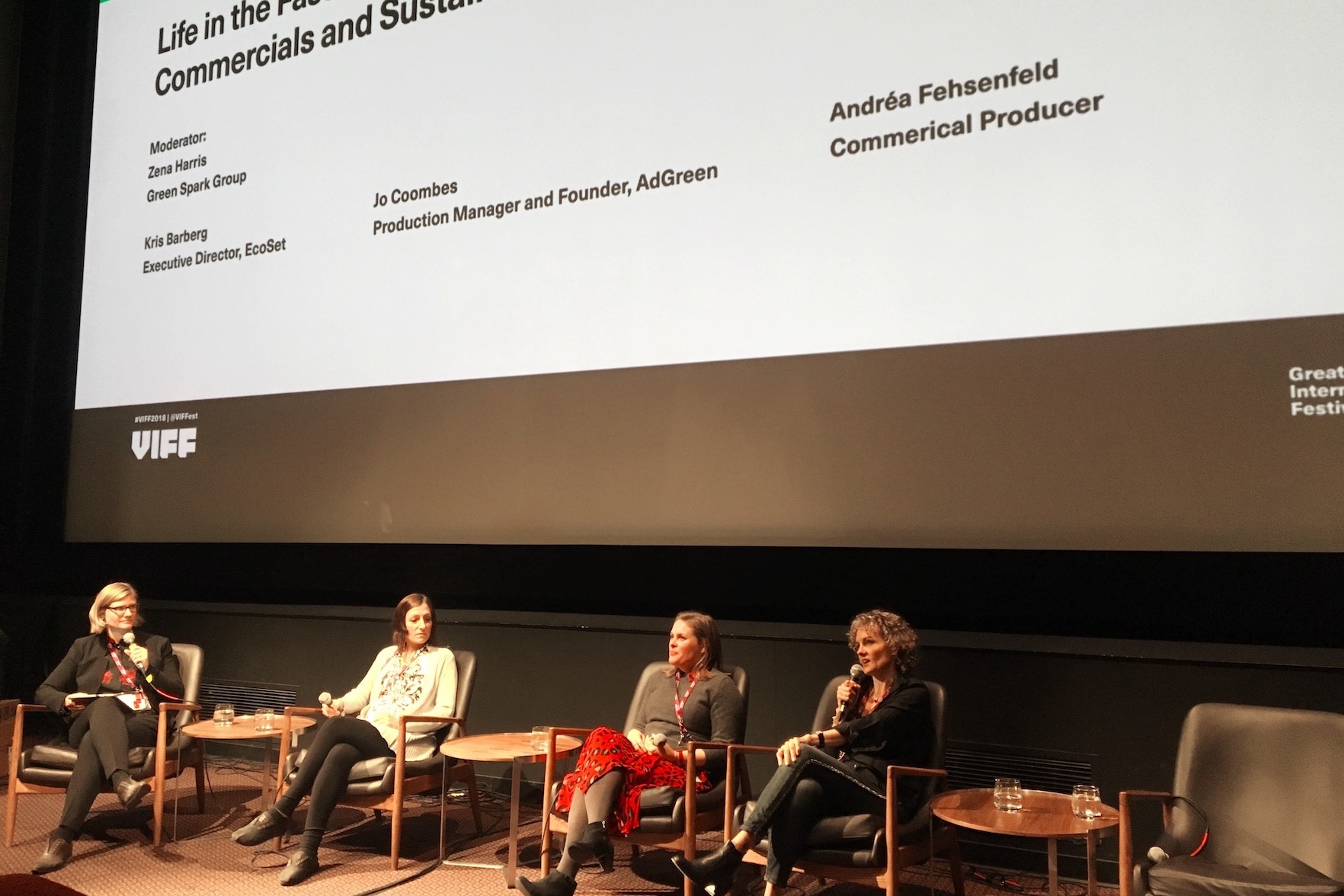 Zena, Kris, Myself and Andréa 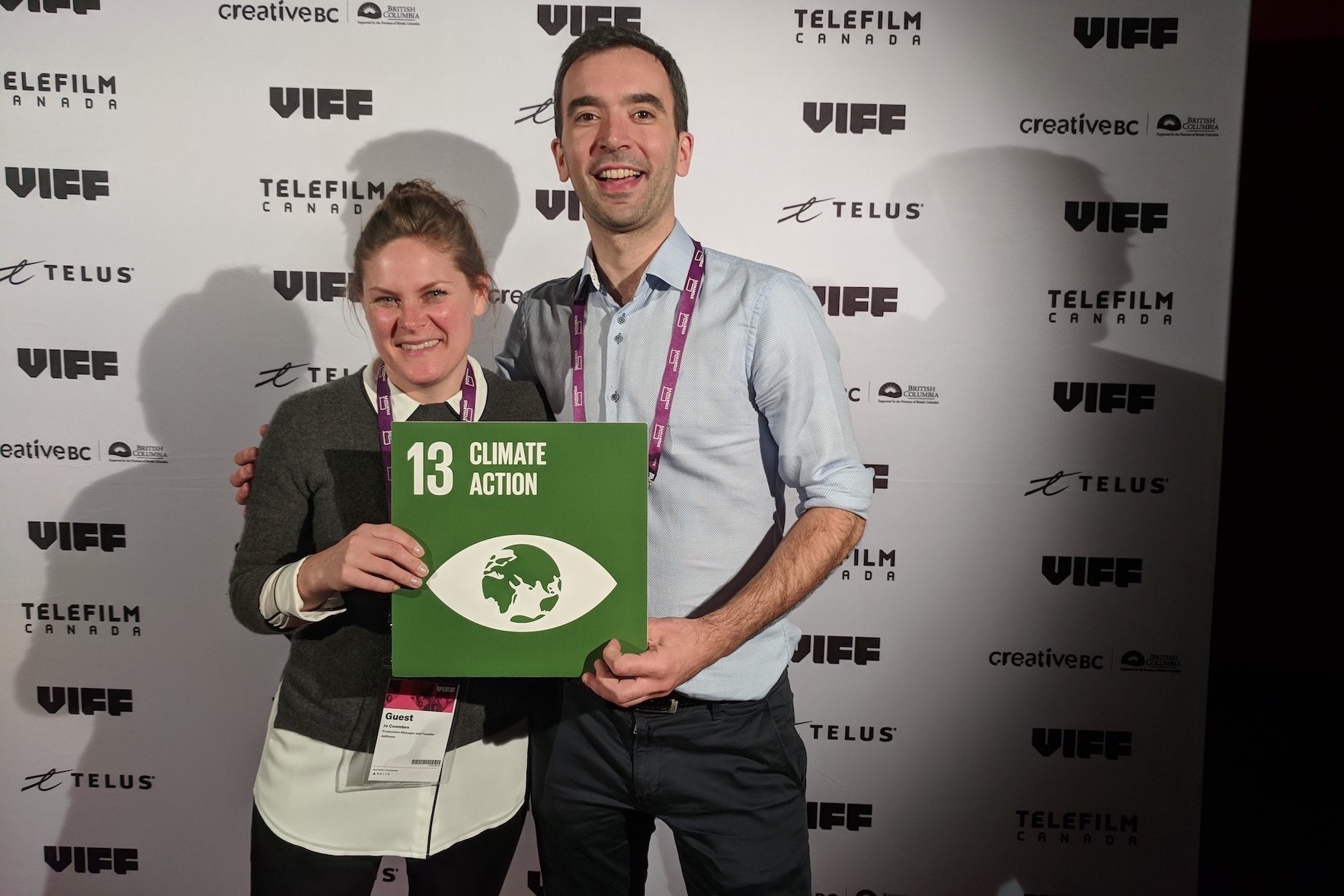 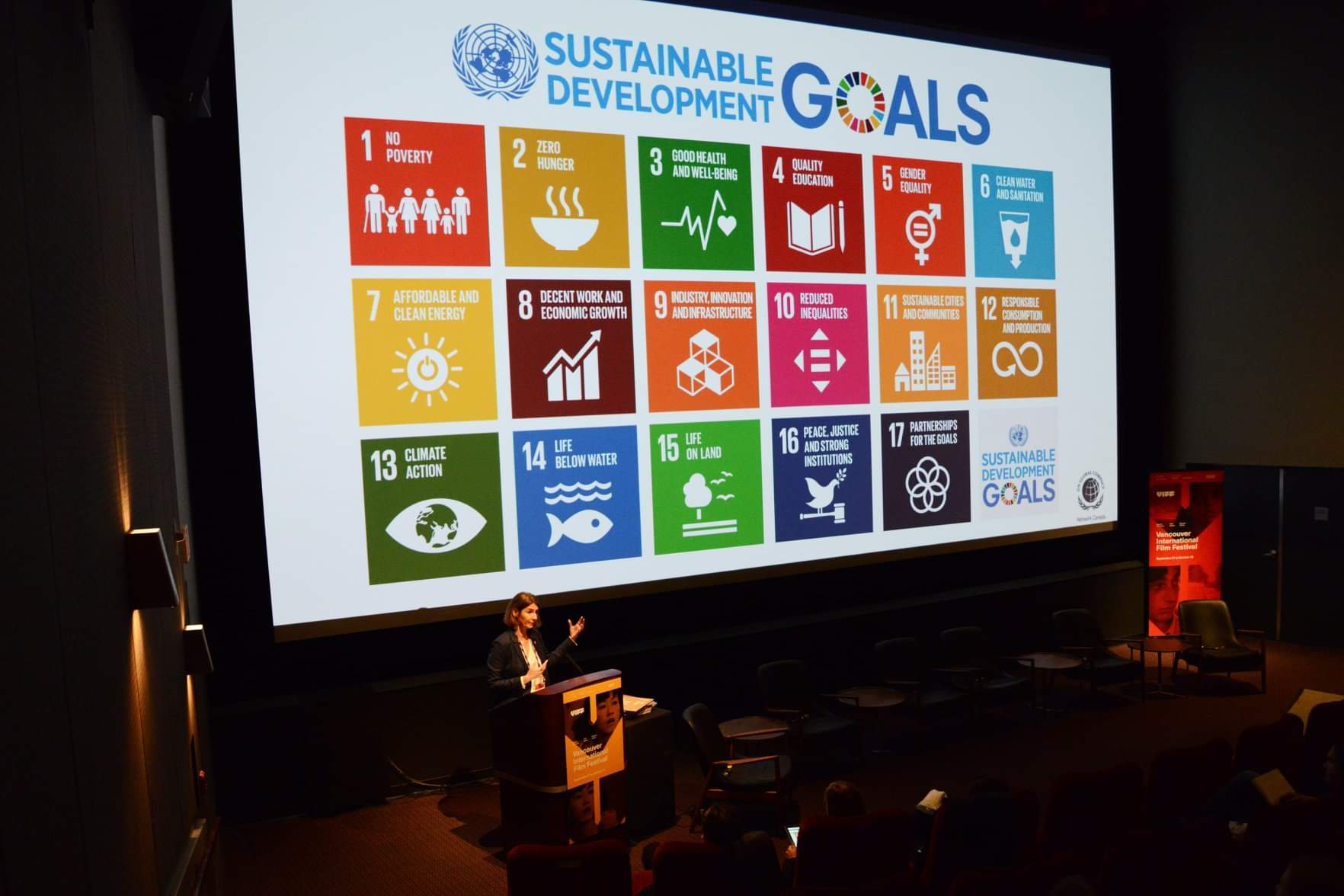 My overriding takeaway from the forum was that we have real strength in numbers. During the Sustainable Physical Production session, BC based producer Clara George told several inspiring stories of dogged determination. On TV show Magicians, she had driven down paper use with a 'print on demand' policy and the encouragement of digital paperwork (using apps such as Scriptation) amongst her cast and crew. Clara had also dramatically reduced meat consumption by asking the caterers to buy less meat, and had mains renewable power installed in a warehouse space which was doubling as a studio. However it was an anecdote about encouraging a key supplier in Vancouver to offer hybrids and electric cars that really stuck with me. Upon asking the rental company about the possibility of having some of these vehicles in the fleet for her next project, the supplier mentioned that they didn’t have any and that no one had been asking for them. Not satisfied with this response, Clara gathered signatures from other productions using the same company and presented them with it. This strength in numbers made them sit up and listen, and hybrids were soon on the books and available to productions who wanted them. We have this same power in advertising - and a very tight knit community. There’s no reason we can’t apply this method to the things we want to change! 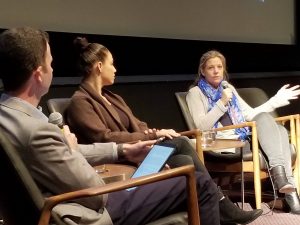 The festival finished up with the launch of Scriptation’s #pledgepaperless campaign. Although in advertising we use comparatively small amounts of paper for our 30 second scripts, one TV show reported using 6 cases of paper over a 6 month production. That’s 1,225,000 sheets of paper - and an awful lot of money! Scripts are often reprinted for cast and crew on a daily basis as they are being refined, with previous versions becoming obsolete sometimes within a few hours. Scriptation has been working to re-educate the TV and film industries for some time - their app allows notes and highlights to be transferred from one digital version to another. To see it in action is truly magical! We at AdGreen have also been encouraging paperfree sets for a couple of years as part of Five Easy Things, advising people to view PPM decks and other paperwork digitally, or to print one large copy of on-set paperwork and display it on a noticeboard at unit base. However, even though we may use less paper, there’s still scope for us to #pledgepaperless - go to their website to find out more, and take the pledge! 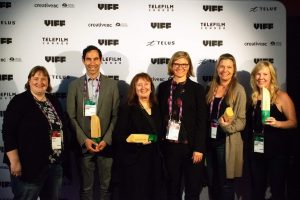 I rounded off my trip with a visit to Portable Electric’s workshop. The company has been developing clean portable power stations for some time (see what they did there?), supporting shoots as well as festivals and sporting events with their portable 2k, and 5k power stations, and the towable 13k unit. They’ve also recently donated their time - and portable power - to those in North Carolina who fell victim to Hurricane Florence and are still without mains power. Discussing how the units work with CEO Mark Rabin was akin to going back to GCSE physics, but it was great to understand the theory behind these rechargeable machines, and to get to grips with calculating power needs on set. #generatormaths anyone? Mark was also honoured at the Sustainable Production Excellence Awards at the forum - a truly deserved accolade. They will have their new UK (230V 50hz) VOLTstack 2k and 5k power stations available starting in the new year 2019 - exciting! 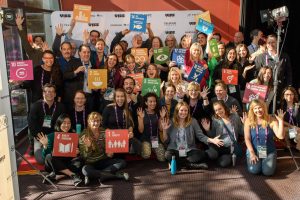 All in all it was a fantastic experience, and a great opportunity to meet those in person who I had only emailed or skyped with until now. Thanks again to the VIFF team for having me, I’m looking forward to hearing how the sustainable production in advertising conversation progresses in Canada! Next up for AdGreen is GPGT4 on November 28th, and the Green Zone at this years FOCUS on 4th and 5th December, presented in partnership with BAFTA's albert. More info coming very soon - keep an eye out for our newsletter!